During the hot days of summer, the Rookie Olson family did all their cooking in the summer kitchen. The building was moved to the Heritage Center property in 2006 from its location off County Road 70, just south of the Cambridge Community College.

The Mattson cabin, built in 1872, was home to Peter and Anna Mattson. During their first winter in the house, Anna and daughter Maggie made jewelry using their hair. When his parents died, the oldest son Lorie and his wife Bina inherited the cabin. They had four children: Geneva, Hazel (who lived to be over 100), Morris and Rachel.

Located on the grounds of the Heritage Center (NW corner of the Isanti County Fairgrounds), this cabin is in the middle of renovation. To help out, call the ICHS office at 763-689-4229.

Peter Mattson and his sons, Louis (13) and Andrew (11) built our log cabin. The Mattson family left Sweden April 14, 1870. They filed for homestead and were given 160 acres in Springvale Township, Isanti County, Minnesota. The train only went as far as Anoka so after arriving in Anoka, they set out on foot to their new home. They had bought a big sled, and loaded it with their personal belongings, plus a stove, four chairs,a shovel, an axe, a saw and 100 pounds of flour. They took turns pushing and pulling the sled for the 38-mile trip from Anoka. There was already some snow on the ground so it was important to find shelter before winter. There was a steep hill facing south on their homestead property, so they started digging a hole the size of a room. They cut down trees to make the roof for the meager dugout house. They put a window and a door on the sunny side and the walls were propped up to prevent cave-ins. There was plenty of fuel to keep warm and cook with. The nearby lake and river furnished fish and in the woods were venison and partridge.

Logs were cut for a log cabin and in 1872 they moved into the three room cabin consisting of a large living room and two bedrooms. Some years after, they added a kitchen, and still later a pantry and a back bedroom.

The log part of the house was lived in for 122 years. Louis Mattson’s four children were born in the house, as were the eleven Norberg children. The large cabin living room has seen many gatherings,ladies’ aids, bridal showers, Thanksgiving and Christmas dinners,as well as many family get-togethers such as the 25th Anniversary of my parents, Rachel and Alfonse Norberg.

We can’t help but admire the handicraft of our ancestors. Those logs were all shaped with a hand saw and axe; just look at those corners! What skills and determination they had in those years. 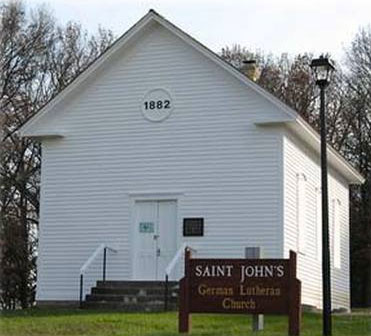 St. John’s Evangelical Lutheran Church at Bradford is primarily significant for its association with the German population of Isanti County.

St. John’s is a well preserved example of the small churches that have served Isanti County’s rural population throughout the county’s history. The Germans were among the earliest ethnic groups to settle Isanti County. Their presence has been overshadowed by the vast numbers of Swedish immigrants who followed them, but isolated German settlements survive in southwestern Isanti County and in the southeastern part of Bradford Township. The German Lutheran homesteaders of Bradford Township organized and built St. John’s in 1882. The congregation was never large, and during most of its history the church shared a pastor with the German Lutheran congregations at either Crown or Weber, the two other German settlements in the county. In 1956 the congregation closed the church to merge with the St. John’s Lutheran Church at Weber. The Isanti County Historical Society acquired the church building from the Weber congregation in 1973. St. John’s is representative of the many rural churches scattered across Isanti County which served the important function of binding together the small ethnic communities comprising the county’s rural population. The surviving churches record the concentration areas of the ethnic groups and denominations. The extremely well-preserved condition of St. John’s make it link with the county’s German immigrant population.

The Spencer Brook School District No. 1 is primarily significant as a rare surviving structure associated with Spencer Brook, a community settled by New Englanders during the earliest phase of Isanti County’s development. 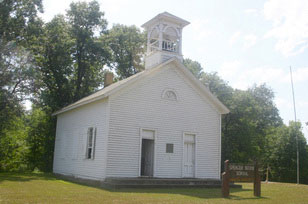 Settlers from New England were the first Euro-Americans to make permanent residences in Isanti County, preceding the better-known and more numerous Swedish immigrants who arrived in the area from the late 1860s to the 1890s. Spencer Brook was settled in the late 1850s, mostly by Mainites, who were engaged in lumbering. The village became the largest settlement of native born Americans in the county. The settlers organized the first rural school in the county in 1858. School enrollment outgrew the homes in which it was first held, and land was purchased in 1874 for a school site and the present building was constructed. The school has been closed since 1945, but the Spencer Brook Historical Association was formed in June 1969 for the purpose of restoring and preserving the schoolhouse.

While the Swedish Lutheran Church dominated the county, the numerous congregations that broke off from the State Church have played an important part in Isanti County’s settlement and development. Among the non-conformist churches of Isanti County were the Baptists, Evangelical Free Churches, and Swedish Mission Churches. The Swedish Mission Church of South Maple Ridge was an organization which was established in 1884. For the next thirteen years services and Sunday School were held in homes of area residents. In January 1897 it was decided that a church building was needed, and construction began that summer. The congregation was never large enough to afford a full-time pastor, but shared pastors with other rural congregations, a common practice in the more sparsely settled regions of the county. The simple lines and modest proportions of this somewhat primitive structure reflect the more pietistic beliefs and dislike of religious formalism shared by church members. The church records end in 1943, and regular services ended shortly after that time as well. The building, however, continues to be maintained and is an outstanding and well preserved example of the non-conformist rural churches organized and built by the Swedish immigrants to Isanti County.